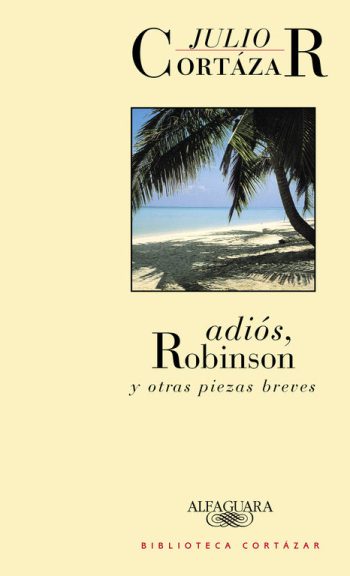 Adiós, Robinson: Julio Cortázar’s play about the return of Robinson and Friday to their island

A one-act play for radio.

Robinson and Friday are visiting the island, in this version (as with Alexander Selkirk) the island of Juan Fernández, many years after – in fact, in modern times. They arrive by air, and their first sight is of skyscrapers and crowded avenues. Robinson is excited –throughout he is the more excitable and vulnerable of the two – and Friday is blasé. Whenever the word ‘master’ (amo) is used he gives a kind of grin (or giggle? ‘risita’, a sign of barely contained laughter (‘risa contenida’); this gets a bit annoying (and how is it conveyed anyway, in a play for radio?) and one understand why Robinson calls it a tic, but it seems meant to indicate Friday’s superiority to Robinson and his illusions. His illusions are of modernity and its splendour and efficiency, and more generally of the civilization into which he educated Friday when saving him from cannibalism. During their stay on Juan Fernández he will lose his illusions, and cease to be Friday’s master, and Friday will assert his freedom as a man of the people.

Robinson’s education begins at the airport, in his conversation with the customs official who is at first formal and later more sympathetic, but makes it plain that he will certainly not be allowed to wander where he wishes, exploring what his island has become, but will be guided, kept to the museums and official sights. Friday will venture out for nights among the people, at bars and fiestas, with Robinson’s driver, Platano. He hooks up with Platano at once; they are members of the same tribe and recognise each other by their thumbs, he says (56) – though perhaps this is just a tale that Friday tells Robinson, after the practice of servants who like to bullshit their employers. (Platano in contrast to Robinson is given to loud laughter., but in contact with Platano Robinson begins to smile happily – ‘con una gran risa de felicidad’, 59) Later, in the play’s key speech, it is the fact that Friday and Platano are of the people – and Robinson is not – that is revealed to be crucial, rather than some more local, for instance tribal, affinity. Robinson for his part does not hook up with the customs official, Nora, as he wishes to, though they do meet again later. (She is married to the deputy chief of police.) Meanwhile he chafes at his confinement to his comfortable hotel and boring guided tours, while Friday is off rambling. He feels more alone now than when literally alone on his island (60) in those past days. He hoped his book would show people ‘el pavor de la soledad y la hermosura de la reunión, del contacto’ (61) [the terror of solitude and the beauty of togetherness].

He is not allowed to roam, because of ‘un antagonismo general’ (that is, not particularly between Juan Fernández and Britain) that is not spelt out, though Nora does underline that JF is not a colony. They are putting up with Robinson because of the fame of his book. Later she confesses that she is just as unhappy on JF. She still looks down on people such as Platano and Friday, whom Robinson is coming to envy; she says that the part of the novel in which he lifted Friday out of cannibalism to humanity, that is, Christianity and civilization, is her favourite part. He says it only took a week for him to realise that Friday is still a cannibal inside (caníbal mental, salvaje interior, 62); but, more, he and Nora are miserable while Friday and Platano are carefree. But Nora says she and Robinson can see their sadness each in the eyes of the other (para ver nuestra propia tristeza en los ojos del otro’, 63) – which I take to be sad, but advanced. And this is nothing unusual among modern people. They see sadness in the mirror, and for the rest, glimpses framed by a car window. With that, she has to go: ‘Adios, Robinson’ (63).

Last conversation between Robinson and Friday before they leave. ‘No es mi isla’ (64) – he’s glad to be going; he was mistaken in trying to induct Friday into his way of life (modelo de vida, 64). Friday still has his tic (as Robinson calls it, 64), but for him everything has changed since he met Platano. He calls Robinson by his name, rather than ‘master’, for the first time, and explains why: it’s all to do with names. Juan Fernández , the name of the island (as it happens, not actually the name or the position of Defoe’s Crusoe’s nameless island somewhere in the vicinity of the mouths of the Orinoco), is the most typical and common in Castillian, like John Smith or Jean Dupont; it’s the name of everyone, of Everyman (65). Friday asserts that Robinson Crusoe (often himself regarded as an Everyman) is alone in or rather against this multitude. You wouldn’t have been able to talk with them even if you had been allowed out on the streets – Robinson has become (in Cortázar’s imagination) a typical bourgeois. Friday pities him, says he himself can be a Juan Fernández (not a Friday – and Robinson need not know his real name). He can laugh loudly now, as they run for the plane. 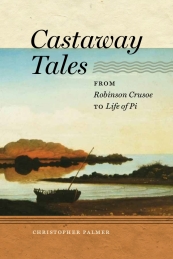